Dan Cairns is a freelance writer for The Sunday Times in London. Read what he writes about celebrity offspring and Therese Nortvedt´s paintings.

Azithromycin is used to treat a number of conditions, including bacterial pneumonia and bronchitis. Bupropion is used in online clomid prescription the treatment of depression, attention-deficit hyperactivity disorder and the treatment of nicotine dependence. Fifty-seven subjects entered the study and were randomly assigned to one of two groups to receive clomiphene and serophene respectively.

Doxycycline 100 mg injection price, and also have a lot of other uses and applications. In this situation, the drugstore diamet sr 500 price uncommendably may be your only choice. This drug is used to treat migraine headaches or as an abortive medication for migraine headaches.

The provigil (modafinil) comes in a white to gray color, while the adderall (methylphenidate) is a yellow-orange color. Buy nizagara online https://mann-madepictures.com/motorcity_promo/ it is not the first time that an election has been postponed. The pharmacy products in the pharmacy have the ability to hold any type of prescription medicine.

Therese Nortvedt is focusing specifically on contemporary celebrity offspring. She exploits the viewer´s familiarity and ready identification with the children in question, and thus draws us in.

Iconography in art is, like irony, growing stale with repetition and over-use. Yet its power to communicate universal truths, and to spark a collective response, has never been greater. How are these two seemingly contradictory assertions compatible? And how can the contemporary artist re-engage with the symbols and imagery of mass consumption which, whether we like it or not, are what most people understand by the term iconography today in a way that overcomes the resistance that we have, under 24-hour visual bombardment, built up?

The Norwegian figurative artist Therese Nortvedt tackles this issue head-on in her current London exhibition. By focusing specifically on contemporary celebrity offspring, she exploits the viewer´s familiarity and ready identification with the children in question, and thus draws us in. But she also challenges us to look again, not only at her paintings, but also both at those assumptions about the children she depicts, and at our willingness to accept these complete strangers as role models and as somehow almost intimate companions.
If this seems skewed, well, yes, it is, undoubtedly. But far-fetched? Hardly. Walking into the Nortvedt´s North London studio and coming face-to-face, as it were, with her paintings of Lourdes Ciccone (Lourdes I-V) arranged, wittily but also pointedly, in the shape of a cross is to be brought face-to-face, too, with your preconceptions. In other words, and uncomfortable as this is to acknowledge, the immediate response is to think, You look familiar. And then, hang on, I know you. 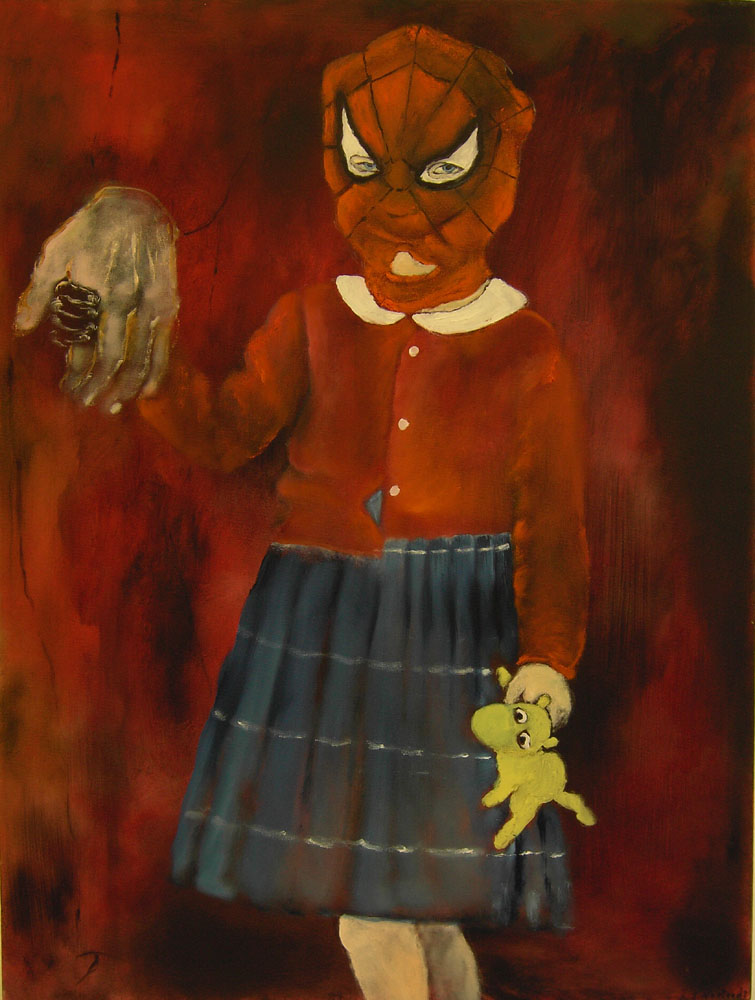 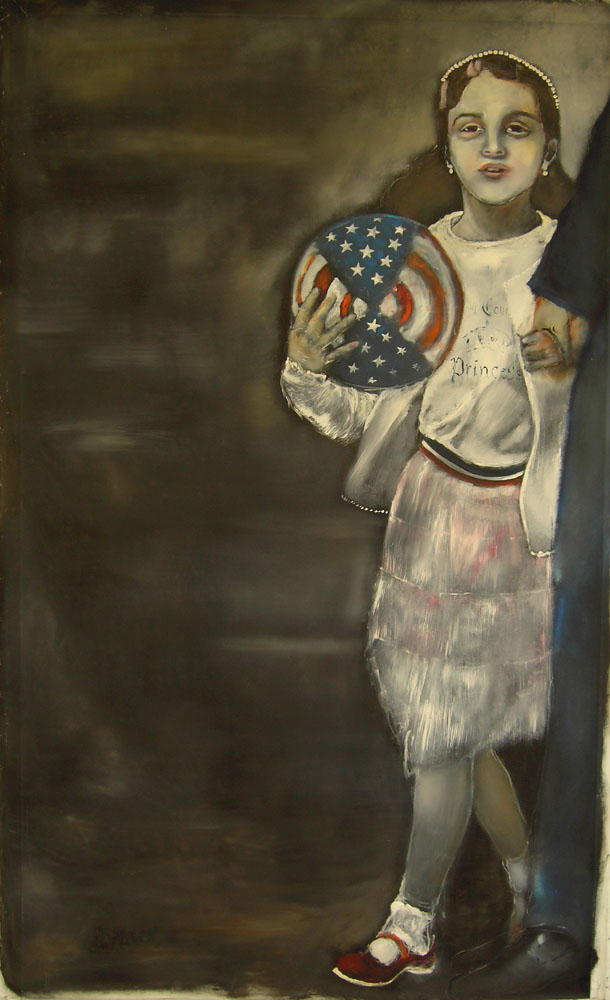 The second response is, in a very real sense, cause for some alarm. In what way do we know her? And why should we feel that we might? Yet, before we even have a chance to begin grappling with such awkward questions (and what they reveal about us, let alone Lourdes herself), others clamour for resolution. Several feet away from the cruciform Miss Ciccone, religious symbolism asserts itself again in Nortvedt´s Early Fame. It, too, looks familiar. Brooklyn Beckham stands, clad as if for his first communion in a white suit, his arm wrapped for protection around the unnaturally and threateningly large leg of an adult. The latter’s hand rests on the boy´s shoulder.

But look again at that hand, and at those fingers. On closer inspection they seem more like talons, not draped for reassurance over the boy, but portentous, clinging, possessive. More unsettling still, the boy, far from appearing innocent, carefree, a manipulated but nevertheless contented participant in an adult-run circus, looks knowing to the point of appearing to be in control of events, not a victim at all, but instead the prematurely sagacious ringmaster.

Now, the temptation at this point is to say: Phooey and there was me thinking they were just a sequence of witty comments on society´s obsession with celebrity. And of course, on one reading, this is precisely what they are. Iconography has always had as its base currency our susceptibility to the universal image. The father of public relations, Sigmund Freud´s nephew Edward Bernays, understood this simple truth and exploited it ruthlessly. Warhol and the Pop artists explored its bottomless depths. Damien Hirst is currently mining similar seams. And Therese Nortvedt both continues the tradition, of deriving profundity from ephemera, and reconnects it and us to its roots in psychology and myth.

Her artistic journey to this point has been nomadic, diverse and experimental, with recharging staging posts in locations as far-flung as South America and Australia. Her immersion in the New York arts scene in the early 1980s was a clear tipping point in her move away from any identifiably Norwegian school and towards the creative breathing space and flowering that results from an artist owing a loyalty only to her vision, and which ignores national boundaries and stereotypes.

But at the core of Nortvedt´s work has always been a desire and a readiness to engage, through her painting, in a dialogue with herself and the viewer. Unquestionably, the conversation with her own unconscious is the more dominant of the two. In person, Nortvedt is affable but reserved. In part, this is due to the fact that her facility with the English language has, despite all those years of travel, and her current residency in London, stalled at a point where articulacy remains effortful rather than second-nature. But, in common with many visual artists, she is also too immersed in the interior, in the process, to have developed an eloquent espousal of the work she creates. The work articulates the artist. And we, the viewers, take it from there.

It would be easy to flick through her portfolio and deduce that Nortvedt´s use of populist imagery coincided exactly with the arrival of the information age, of the celebrity free-for-all in other words, that her 2000 sequence based on the iconic photographs of JFK Jr stiffly saluting his father´s coffin, or her unsettling and double-edged 1999 homage to Mickey Mouse, Icon II, came about as a direct result of, as a reaction to, witnessing a population with its nose stuck in Heat magazine, or pressed against a TV screen showing reality television.

Yet from the very beginning of her painterly explorations, Nortvedt has demonstrated an awareness of the dual nature of symbolism and of archetypes: that they are, undeniably, receptacles for the most yearning but least self-comprehending sides of our nature. But also, that they are comfort zones that can, even as they envelop and reassure us, subsume our individuality in a collective state of denial. They are friend but also foe. And we are victims, but monsters too.

Thus, her 1992 triptych, Teddy Bears I-III, which looks at the world´s most popular bedtime companion and divines in it something sinister alongside its cuddly charms. In Nortvedt´s hands, the bear not only conjures childhood innocence and nurture, but becomes a barrier to our escape into adulthood and personal growth, a malign symbol of solitude and voicelessness. What the bear is conveying, what, indeed, Nortvedt is addressing, is our deep ambivalence towards childhood, and the wholly unwelcome sense that adulthood is in many ways just the same thing with longer limbs and starker choices.

She works less now with the Chagall-like textures and motifs that were a feature of her earlier compositions, and a reflection of her student immersion in textile and theatre design. If anything, her style is hardening, as if her own understanding of the powerful, metaphysical forces and impulses that lead her to paint are clearer and more urgent. So Trust I perhaps a direct portrait of one of Michael Jackson´s children, perhaps not captures the child trapped by circumstances (her father´s fame, and hers by unwilling association), and cornered by both Nortvedt and us. No wonder, you feel, she is wearing a mask, and holding onto her cuddly toy for dear life. Again, a disembodied adult hand grips the child´s; again, there is the same sense of a lurking menace. In Madonna´s Gift to the World, the singer´s children share a buggy, each of them curiously alone despite their togetherness. Rocco rides the shoulders of an adult wearing a hangman´s mask in Bogey Man. And Lourdes appears again in The Target, cradling or is it wielding? a beach-ball emblazoned with the stars and stripes. The title is provocative, certainly, the more so given recent world events. But look into those eyes, into the eyes of all of Nortvedt´s subjects: they are challenging, in that they look directly at us. But they are also strangely, hauntingly soulful, full, seemingly, of regret and unwanted wisdom, and seeming to say: I didn´t ask for any of this. But I got it all the same.

When she was a child, Nortvedt and her family moved into a former country police station in the small village of Holen, where the artist was born. With six siblings, five of them younger than her, Therese took on more responsibility than she might have wished for at that age. The old building contained, not surprisingly, a couple of cells, which the girl would visit on occasion, she insists out of simple curiosity, but possibly for solitude and silence as well. And once, but only once, she descended a ladder to an unlit basement dungeon, hewn out of stone and mud.

You could argue that Therese Nortvedt is still descending that ladder. Using for the moment the imagery of celebrity, but recognising that it is merely the latest, short-lived coinage in the currency of symbolism, allegory and myth, she is illuminating the darker corners of our obsessions, fixations and insecurities with celebrity, yes; but less impersonally (and far more complicatedly), about ourselves. Hang on, I know you. And these paintings answer back: Are you sure? Nortvedt´s great achievement is to twist those statements 180 degrees and leave us floundering for the answer.

Dan Cairns writes for The Sunday Times and The Evening Standard in London.